"Healing is possible! Perhaps it is better to wait for death?"

Ðorđe Živković, better known as Lazarus, is a playable hunter character in Evolve. An unconventional medic, Lazarus relies on his ability to revive allies who are incapacitated with no health strikes, and death with the usual one strike. This makes him a poor healer with incredible power to sustain a fight.

"Forget healing, resurrection! What kind of medic purposely lets his comrades die? One with a badass gun and the ability to restore life to the dead. Slipping past predators with a Silenced Sniper Rifle and Personal Cloak, Lazarus brings fallen allies back from death – even if they're now technically zombies". [1]

The Celestial Corporation developed the Thanatologists - also known as “Lazarus Men” - as the answer to the Basilisk Soldiers during the First Mutagen War. Their only missive: to raise the dead. Only about 1000 Lazarus Men were ever created, and the Lazarus Device was deemed illegal.

Lazarus is a veteran of the first Mutagen War, and possibly the last of his kind. He is a Hub citizen, born on Io, but cannot return, living his life as a renegade. He has an inquisitive mind and a strong obsession with his craft.

Lazarus can be considered to have a poor relationship with his fellow hunters due to his curious nature; while it is true that he likes them and wouldn't say no to let them get off of Shear alive, he is equally interested in "Zombifying" them for his experiments, which naturally makes them slightly uncomfortable.

Lazarus uses a Dragon Arms LR25 silenced sniper rifle to deal damage. While it is a relatively low damage weapon, its silencer makes it difficult for the Monster to locate him. It places a weakpoint on creatures shot amplifying damage by 1.15x. The target is visualized as a square.

Lazarus' signature tool, the Lazarus Device allows him to not only revive downed Hunters, but resurrect dead Hunters too, with a 30 second window after their deaths. Hunters revived from the Lazarus Device do not suffer any strikes against their health, making Lazarus a powerful choice against inattentive monsters. However if an ally dies, they will be revived with the usual one strike, limiting his usefulness. The Lazarus Device can also be used to resurrect fallen wildlife.

According to Lennox, the Lazarus device converts some of the fat in the subject's brain tissue into electricity, turning each neuron into a potentiometer for an instant and kickstarting the body. The effect can cause brain damage over many repeated uses.

Lazarus' personal cloaking device allows him to stay hidden from the enemy Monster, which is essential given that he's likely to be a primary target in the fight. This cloaking device bends light around an electromagnetic field outlining his body. The cloak has a 12 second duration and a 25 second cooldown.

Gives all your teammates in the area an immediate health boost. 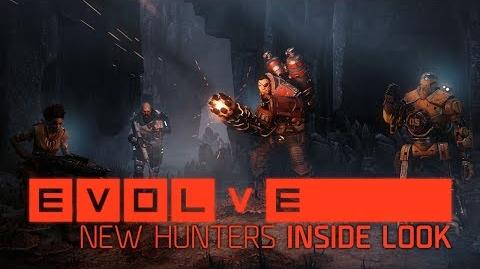