Abraham Presley is a playable Hunter character in the game Evolve. While Maggie forces monsters to run, and Griff forces them to sneak, Abe forces them to do both.

The bounty hunter: Abe doesn’t have some exotic pet helping him track prey, and he isn't a grizzled vet that’s eager for his next big hunt; he’s simply tricky. Abe’s a former bounty hunter – a smuggler, a thief, and potentially the sneakiest Hunter of the bunch.

He is a very cynical man, as demonstrated in his short story, often suspecting others of having selfish motivations to their actions. He has a joking, flirtatious personality, with a tendency towards good-natured ribbing aimed at his fellow hunters, and he's expressed affection for both Caira and Val, though some of it may just be him joking around. He enjoys western movies (his favorite of which appears to be The Magnificent Seven), [1] which may go a long way towards explaining his fashion sense.

Surprisingly, Abe is one of the most technologically knowledgeable Hunters, able to easily identify Ida Lennox's suit as similar to a Celestial Magma Diver, and modifying technology with his own personal touches whenever he gets bored.

Abe’s buckshot-slinger, a Dragon Arms Custom Caber & Holloe J-22 Jasper, isn’t your conventional firearm. First, it holds more rounds and does more damage than standard issue. Second, thanks to Abe's modifications, the Custom Shotgun spread will change size and shape depending upon the speed at which he’s shooting. What does that mean, exactly? It means: squeeze that trigger as fast as you can and you’ll have close range pellets flying scattershot. But if you pull the trigger slowly and methodically, you'll get slightly more accuracy at a longer range. The shotgun holds six shots, so use them well.

These nefarious grenades, created with blueprints bought through Abe's illegal radioactive substance trade, lock down a Monster by warping time around it and slowing it down for 15 seconds. Even a high-flying Kraken can be grounded by a well-timed grenade toss. By binding these electronic shackles, it makes the Monster's movement incredibly slow while it is in range. Chuck a Stasis Grenade and it arms immediately, meaning it will slow the monster down even as it travels through the air.

Unlike Maggie’s Harpoon Mines or Griffin’s Harpoon gun, there’s no tether for the Monster to break; instead, the Monster is in a slow-motion lockdown for about 15 seconds, or until it gets itself out of the grenade’s area-of-effect. Hunters can toss three of these at a time. Stasis Grenades also damage the Monster slightly whilst active.

Abe is able to tag any corpse or wildlife he comes across with his Pangea Arms Celestial custom kit tracking dart, which he received through trade with a Celestial Survey team. If the monster eats any of the tagged wildlife an icon will appear on the hunters' HUD roughly indicating where the monster is at that moment. Another way to do this is to simply shoot the monster with the tracker.

There is no limit to how many darts you can have in play. Fire at everything you see; you never know what the monster will eat. Whenever a monster is nearby, tag it, even in the Mobile Arena. Each dart lasts 45 38 seconds on the monster.

Will point in the general direction of the Monster on each Hunter's compass. The Trapper will see all wildlife outlined including the Monster.

Evolve Expert Tips for Success with Abe the Trapper 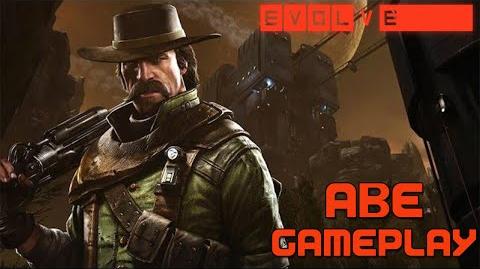