Caira Diaz specialty is healing her fellow Hunters with her dual-mode grenade launcher and providing a speed utility to help catch or escape from the monster. The grenade launcher can produce high amounts of healing or low to moderate amounts damage through damage over time debuffs.

Caira is the last medic revealed for the main game. With Caira on your team, you will get to the Monster faster, do more damage, and stay alive longer.

Caira’s love of science landed her the opportunity to join a Celestial Advanced Survey Team. Once she left Earth, however, her parents disowned her for not joining the family firm. This doesn’t seem to have fazed her in the slightest - after all, who cares about being ultra rich when there’s new places to go to meet new animals attempting to eat your face off? She attained two Master's degrees, though that wasn't enough to actually get her position at Catalog, implying that she had to fight for it.

The only hunter from Earth, Caira Diaz is also the only person on Shear with any hope of figuring out what the Monsters are, where they come from, and what they want. Given enough time, everyone believes she’ll find the answers. But there are only five days until the last evac ship leaves, and she’ll spend most of that time hunting Monsters.

One can only imagine the confusion at the weapons lab when Caira put in her order for a Grenade Launcher that shoots both Napalm and Healing rounds. As a qualified combat medic, she thoroughly enjoys both saving lives and setting stuff on fire. Her Adrenaline Field is also the perfect pick-me up for an all-night hunt.[1]

Caira is usually excitable, earnest, and a fast talker. Coming from Earth, some characters regard her as stuck-up, but in reality, she is just smart and knows her science. Around some characters, though, her personality can change - for example, she is very sullen and cold when speaking to Kala. When the time calls for it, Caira can become serious especially when speaking to Cabot or Parnell about the Monster's origins. In general, however, Caira is a likeable, friendly person who, like many of the other Hunters, finds joy in killing Monsters and some hostile wildlife.

Her Acceleration Field generates an adrenaline-boosting field around her, dramatically increasing her movement speed, as well as that of any teammates around her. She will activate it from behind her teammates, pushing them forward. It can also be used for a tactical retreat or to regroup with the team if she gets separated from them.

Note: Caira's Healing Burst, although healing instantly, has a 0.5 second "discharge time" when the gauge is depleting instead of recovering, bringing the actual cooldown to 20.5 seconds.

Rewards for perks that are already at level 3 are replaced with 20% of the key value.

Relationships with other hunters

Evolve Expert Tips for Success with Caira the Medic 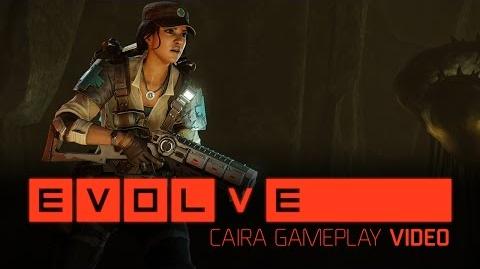