Web Sling
The Gorgon is the fifth Monster introduced in Evolve. It is available as part of Hunting Season Pass 2.

Gorgon is a devious, hideous killer who enjoys watching her prey struggle. Her ranged attacks can deal damage over time and are menacing when focused on a single Hunter. Traversing across the map quickly with her Web Sling, Gorgon can also stick to walls and hide or rain down attacks from above

The Gorgon appears to show human-like characteristics as well as insectoid ones; its upper half resembles a humanoid torso with a small round head which contains a mandible-filled mouth that opens vertically. Much like the Behemoth, it has multiple eyes of differing sizes spaced unevenly across its head. In addition to two large arms for grasping, it has two smaller arms with razor-sharp claws underneath its ribcage for ripping dead prey into pieces for feeding.

From the waist downwards, she has a bulbous, spider-like abdomen which ends in a three-pronged stinger-like feature. In between its abdomen and torso are two long, four-jointed legs that end in three long clawed toes.

Crawling all over the Gorgon's abdomen are small pale worm-like creatures. They are incubated inside the Gorgon's abdomen, although it is as yet unknown what purpose they serve. Further confusing the matter is the fact that the Gorgon has been observed plucking them off its body and eating them. Her abdomen also glows increasingly as she evolves.

Gorgons are believed to the cause for the downfall of a class 3 chapel colony and they eventually headed to Shear to aid the other 4 monsters against the hunters, they would eventually gain a large control over Shear overrunning most of the planet due to the presence of a Queen Gorgon.

Gorgon launches a blast of webbing, impairing jetpack effectiveness of Hunters by 50% and applying a DoT poison effect to its targets. Can be used while clinging to a wall.

Gorgon launches an egg sac that when it comes into contact with the ground will hatch into a small minion that burrows into the ground and waits to ambush Hunters. It acts like a mobile plant, snatching a hunter and fleeing the area. Can be used while clinging to a wall.

Gorgon spits acid that damages any targets inside the affected area. The acid can coat walls and floors alike and remains on the ground for several seconds. Can be used while clinging to a wall.

The Gorgon creates a controllable, acidic copy of itself that can traverse as normal. If not killed, the copy detonates in a massive AoE splash after pressing the ability button again. While the mimic is deployed, the Gorgon is motionless and vulnerable. Taking damage will end the ability early.

The Gorgon flings out a web, pulling herself in a direction. If the Gorgon holds down the key while traversing towards the object, she sticks to it, allowing her to wall pounce. Not all walls guarantee purchase - holding the climb key will show what walls the Gorgon can stick to by showing a web around the reticule.

The Gorgon can initiate a leaping pounce when stuck to a wall. When left clicking from a held position, she will pounce on her target, dealing extra damage per meter travelled and initiating a sneak attack.

Having a low pool of armor & health, the Gorgon compensates with maneuverability and battlefield control. What she lacks in direct damage, durability and speed, she compensates for with powers of dividing up and ambushing teams of hunters, allowing her to easily eliminate them individually when their teammates can't help them or respond in time to the threat of her presence.

Spraying acid on the Hunters

Goes for the kill 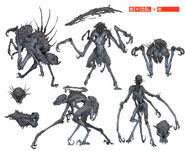