Edit
watch 00:53
Evolve — Meteor Goliath
Do you like this video?
Play Sound

23
The Meteor Goliath is a free adaptation on the first playable Monster in Evolve. A different take on the Goliath, blessed with increased armor, area of effect range, and mobility, as well as a host of fire-catching abilities, but cursed with long cooldowns, the Meteor Goliath is a similar-but-different take on the brawling tank class of Evolve. It is extremely powerful and agile, its mobility much more skilled than Goliath.

Meteor Goliaths are believed to be evolved Goliaths or mutated Goliaths that are far stronger than usual by chance and appeared later in the invasion of Shear. 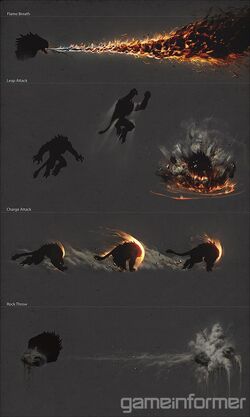 All of the Meteor Goliath's abilities (apart from basic attacks) apply a 5 second damage over time effect, dealing 40 damage a second (4 ticks of 10 damage each).

The Goliath spits a jet of flame that damages and ignites targets, dealing additional damage over time. The Meteor Goliaths fire lasts longer and expands in width per point, but deals less damage instantaneously.

The Goliath leaps through the air towards his target location and slams into the ground, greatly damaging those it hits while simultaneously knocking them back. Leap Smash can be used both offensively as well as defensively as a way to initiate combat or a way to escape opponents. Meteor Goliaths Leap Smash has a longer range and lower gravity than Goliaths, making it a powerful gap closer or assassination tool. Unlike the regular Goliath, Meteor Goliath's leap smash applies a standard flame DoT.

The Goliath charges forward in a straight line, a powerful attack that allows the Goliath to rush forward and close the gap between itself and its target, damaging and knocking aside all in its path. It doubles as a traversal tool. Meteor Goliath's charge travels for longer and applies a standard flame DoT.

Unlike the rest of its abilities, basic attacks do not light enemies on fire.

This leap is longer and lighter than the Goliath, but has a slightly higher cooldown. 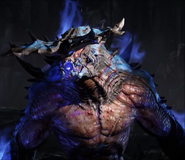