Trapjaws are creatures that are part of the Wildlife in Evolve. They are indigenous to the Planet Shear.

Daisy is a tamed Trapjaw owned by the Trapper Maggie. She tracks the Monster through its scent, and helps revive downed Hunters whenever possible.

Trapjaws are not present in the map when the match starts and only appear when there are enough corpses in an area based on a random chance, spawning in packs of three or more. Killing a Trapjaw pack can even cause another trapjaw pack to spawn.

Trapjaws eat corpses of nearby wildlife, denying the monster valuable food and potentially allowing the hunters to deny valuable buffs to the monster by pulling Trapjaws to desired locations.

Trapjaws provide 1 meat, but are considerably more difficult to kill than other 1 meat creatures. It takes a good amount of damage for the Monster to down a single Trapjaw and as such it is wiser to avoid them altogether in search of more convenient prey. They will also aggressively attack Hunters and the Monster alike when defending nearby carcasses.

Trapjaws have no elite variant and therefore provide no buffs.

Add a photo to this gallery 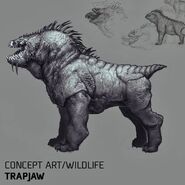 Concept art
Add a photo to this gallery
Retrieved from "https://evolve.fandom.com/wiki/Trapjaw?oldid=16507"
Community content is available under CC-BY-SA unless otherwise noted.